Will GB’s promotion deliver a boost for UK ice hockey? 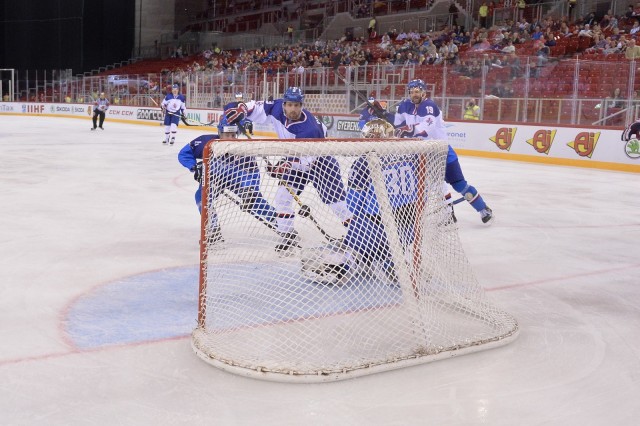 Great Britain’s sensational promotion to the top flight of world championship ice hockey could give the sport the boost it needs, writes our senior consultant Andrew Weltch.

As the lowest ranked team in the IIHF’s Division 1A (the second level), GB was expected to struggle against the likes of Hungary, Italy and Kazakhstan.

But they won four of their five games – including a final-game penalty-shot victory over hosts Hungary in front of 8,500 fans in Budapest last night (Saturday April 28th) to clinch the gold medal.

So, having won promotion from Division 1B (the third level) last year (2017), GB has sailed through this group to join the likes of Canada, Russia, USA, and Sweden in next year’s world championship tournament.

It will be the first time in the top flight for 25 years and respresents an astonishing achievement for an underfunded national team which has long been regarded as secondary to the domestic league, the Elite Ice Hockey League (EIHL), and very much the poor relation of its European neighbours.

Robert Farmer scored 15 seconds from time to secure Great Britain the point they needed to win the gold medal and promotion to play in the top level of the World Championship for the first time since 1994.

How did it happen? A tremendous team spirit seems to have been the key, but there were stand-out individuals in this week-long tournament – Cardiff Devils netminder Ben Bowns performed heroics between the pipes, in defence Ben O’Connor of Sheffield Steelers was outstanding, while Brett Perlini of Nottingham Panthers was the pick of the forwards.

If any individual deserves special credit, though, it must be head coach Pete Russell, who had limited resources and very little time with the squad, but shaped and motivated this talented group into winners at a very high level.

FreeSports, the free-to-air sister channel of “your home for hockey” Premier Sports, showed all the GB games live, with the likeable and informed (if sometimes rather partisan!) commentary pairing of Aaron Murphy and Paul Adey (himself a former GB international), and the BBC was there too.

With no live TV coverage of the domestic league for the past few years (though Premier Sports has shown the UK teams competing in the European Champions Hockey league [CHL]), and no Elite League team in London (or other major cities, Birmingham, Liverpool or Leeds, for that matter), the sport may have slipped from the national consciousness.

Success by the national team – a team the whole country can relate to – will surely help generate interest among people who have never been to a game or don’t live near a hockey town.

The scale of this achievement can’t be overstated – next year Team GB will compete with the world’s greatest national teams – having effectively finished 17th in the world.

Perhaps we shouldn’t get too carried away – that top world championship group is a big competition, with 16 teams, and GB is likely to suffer some heavy defeats.

But for now, let’s enjoy the thrill of that unexpected success and what it could mean for the sport’s profile in the UK.

Andrew Weltch reported on ice hockey for many years in print, on radio and TV. Weltch Media provides a range of communications services for sports teams, organisations and individuals.

This entry was posted in Uncategorized. Bookmark the permalink.