Challenges and changes: How an independent soccer magazine defied the prophets of doom

Guest post by David Collins of Welsh Football magazine. Here he looks at the challenges this independent print magazine has faced in its 25 years of covering all aspects of soccer in Wales.

As the editor / publisher of a small, independent magazine, the publication’s recent 25th anniversary gave me cause to reflect on the changes – and challenges – we’ve faced since we launched in 1992.

Those reflections, on the silver jubilee of Welsh Football magazine, amounted to a mixture of pride and frustration:  pride that we’d built and maintained a loyal following for so long, despite the doom-mongers who have, repeatedly, predicted the death of print media; but frustration too, that the cards seem always to be stacked against the independent publisher – and especially one in our particular sphere.

It is generally assumed that the advent of the digital age must have posed our biggest challenge. To an extent, it’s true that some types of content, originally in our scope, are now better suited to online media. But equally, the digital age has made publishing much easier – not just in the production process, but in areas like research, and reaching potential customers, where social media has been a game-changer for those of us without advertising budgets. And the prophets of doom also under-estimate the enduring advantages of print:  tangibility and permanence.

In fact it’s in the distribution side of the business that a small publication like Welsh Football is most disadvantaged:  high-street newsagents and chain booksellers expect quantities and discount levels on sale-or-return terms that would put any small-scale publisher at grave risk.  Meanwhile the demise of so many independent bookshops has removed one of our best sales channels – especially as the specialist sports bookshop has now completely disappeared. 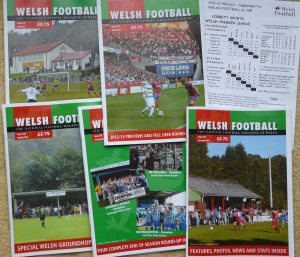 Operating in Wales, we do have the Welsh Books Council to help distribute our product to the independent retail sector – but whereas some Welsh publishers are eligible for financial assistance, we’ve never succeeded in qualifying. Had we been a Welsh language periodical we’d probably have had more luck; or, had we fallen within the narrow definitions of ‘Welsh culture’, there might have been Arts Council of Wales support available.

So Welsh Football‘s longevity on the Welsh publishing scene is down to subscriber loyalty, a few generous advertisers and sponsors, and a dogged determination to keep going. Fortunately, we’ve never been in it to make money, merely to ensure that Wales still has a national football magazine. And, despite the frustrations, there’s a certain satisfaction that we’ve succeeded in doing just that for a quarter of a century.

Welsh Football is published eight times each season and covers all aspects of soccer in Wales. It is based and edited in Rhiwbina, Cardiff, and printed by Harris Printers of Porthcawl.

If you want to produce a publication of your own, or promote your sports organisation, we’d love to discuss how we could help.